What will be the future’s “thing of the past”? 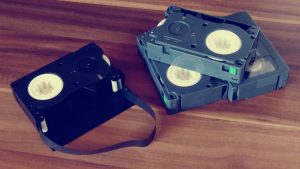 If this really is the end of headphones as we know it, what will be next to vanish from our day to day lives? What object that we take for granted will one day be looked back on with nostalgia, in the same way that older generations revere vinyl and cassette tapes?

An obvious choice is the CD. Some would argue that, due to the popularity of MP3 players and streaming services, the CD is already on its last legs. Although some cars still rely on CD players, most newer models include an aux port or a docking station instead. Will we see CDs become nothing more than glorified drinks coasters within the next few years? One thing’s for sure, we’ll look back with nostalgia at the feeling of picking up our favourite band’s brand new album and playing it over and over again.

Another suggestion is the USB flash drive. At the moment, it’s hard to imagine life without these handy little storage devices – saviours of school assignments and work presentations across the nation. With many sources suggesting that secure cloud storage is the future, however, it’s not unreasonable to wonder whether USB drives will go the same way as the once-loved floppy disk. We’ll miss the feeling of knowing our work is safe on the little device in our hands… but we won’t miss our work being lost forever if we misplace the drive.

If the headphone jack is vanishing, perhaps nothing on our smartphones is safe anymore. What could we see disappear next? Could it be the camera, the voice recorder or the seemingly-immortal FM radio? Or could it even be the charger? With technology now allowing us to carry small portable power banks, enabling us to charge our phones on the go, what’s the next step – built in recharging technology? Could we see smartphones that never need recharging?

Sure, it’d be convenient… but we’d still silently yearn for the adolescent thrill of texting the person you like with that all-important question, just as your phone ticks down to 0% battery.