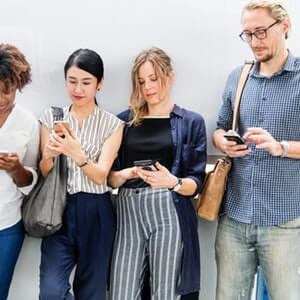 As South Korea claims to have pipped its US rivals to the post in being the first to roll-out a lightning-fast 5G mobile network, many are asking the question “just what is 5G?” Well, let us help you answer that question.

5G means ‘Fifth Generation’, and it is the latest innovation to join the raft of international standards for the way mobile phones work. The new rules cover everything from how cell towers verify the identity of phones to what frequency the radio waves need to be, and they were finalised in May 2018 in California. There, delegates at a conference hashed out the final details required to fully upgrade from the existing 4G standard.

What’s all the fuss about?

Everyone is excited about new, unprecedented mobile network speeds. 4G networks tend to deliver download speeds of approximately 20Mbps, but 5G is said to absolutely dwarf that with speeds of 500-1500Mbps – fast enough to download a full HD film in less than 30 seconds. Is this really necessary? Well, faster is better, so if the technology is there, then why not? The real advantages are all about capacity, coverage and latency.

Will I lose signal less frequently?

In theory, there will be fewer signal interruptions. A typical 5G cell tower can process up to 100x more individual devices than a 4G one could. That means base stations that are currently being overloaded should be able to free themselves up, at least until the Internet of Things (IoT) starts meaning a growing number of portable items are connected to mobile networks.

How can 5G help with coverage?

The areas that do and don’t get good coverage is largely down to decisions made by carriers, who will have to weigh up the cost of new towers against the revenue they will generate. But the new 5G standard enables radically smaller base stations than has ever been possible before – roughly the size of a mini-fridge. This means masts will be able to be placed in locations that have never been feasible before. In urban areas, for example, we could see a mast on every lamp-post, while outside of the city those unsightly towers won’t need to be ruining the scenery anymore.

Latency is the speed it takes for a piece of data to move through both legs of the connection journey. In the past, it’s always taken second place to bandwidth, which measures the number of bits that can travel down a connection in a single second. Latency, however, is becoming an increasingly important factor. Gamers are most familiar with the concept; the difference between a 10ms latency and a 100ms latency is what makes the difference when it comes to reacting more quickly than your opponent.

With 5G connections, which can lower latencies to as little as 1ms, users will be able to do things that haven’t been possible before. We could see real-time VR connections, wherein high latency could cause some rather unpleasant nausea, or remote control robotics that are able to interact safely with the real world.

So when will it arrive?

It is widely expected that the UK will see the arrival of 5G in 2020. In the meantime, leading UK networks like EE, O2 and Three have been tabling bids for the spectrum that will form the bedrock of 5G. As with the 4G roll-out, 5G is likely to only be available in major cities at first. So if you live in London, Manchester, Birmingham or another similar-sized city, you can expect to be among the first in the UK to have access to 5G networks.